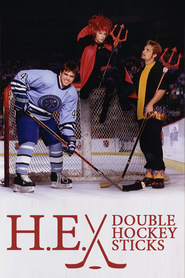 H-E Double Hockey Sticks is a 1999 American made-for-television comedy film directed by Randall Miller starring Will Friedle and Matthew Lawrence. The film is based on the opera Griffelkin by Lukas Foss. The film's title is a common euphemism for the word hell. The film premiered on October 3, 1999, as a part of The Wonderful World of Disney anthology series on ABC.

Satan, in the form of Ms. Beelzebub (Rhea Perlman), sends apprentice demon Griffelkin (Friedle) to Earth's surface to steal the soul of a hotshot young hockey player named Dave Heinrich (Lawrence), who aspires to be the youngest man to ever win the Stanley Cup.