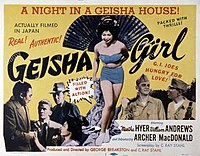 Geisha Girl is a 1952 American adventure film directed and produced by George Breakston and C. Ray Stahl, and starring Steve Forrest, Martha Hyer, Tetsu Nakamura, Heihachirô Ôkawa, and Dekao Yokoo. The full film was shot in Tokyo, Japan. The plot was, in fact, created so as to educate American viewers of such Japanese traditions as a Kabuki theater presentation, a Buddhist religious ceremony, and a geisha house. Despite these features, the Japanese people were presented as stock characters or buffoons. Martha Hyer didn't play the main role in the film yet got the top billing.

Two American soldiers—Rocky Wilson (Steve Forrest) and Archie McGregor (Archer MacDonald)—serve in the Korea War. One day they are on the leave in Tokyo. The easygoing duo wants to visit night clubs and bars, but GIs are not allowed to enter there. Therefore, the two want to find civilian clothing to do what they want. They go to a recommended black market shop and buy new cloth. Archie discovers strange pills in the breastpocket of the suit jacket, and the sales clerck wants to cancel the deal, but they are interrupted by the military police. Rocky and Archie are trailed to a bar where Mr. Nakano (Tetsu Nakamura), who is a powerful gang leader, encounter them and invites them to visit his home, mentioning that there is a geisha school there.