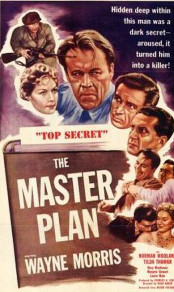 The Master Plan is a 1954 British film noir drama film directed by Cy Endfield and starring Norman Wooland, Tilda Thamar and real-life war hero Wayne Morris. It is set at the headquarters of NATO. It is based on a teleplay Operation North Star by Harald Bratt. It was made at Southall Studios.

Following WW II, a U.S. army officer stationed in West Germany is assigned with keeping classified information away from the Communists. Unfortunately, Red spies know that he suffers from sudden black-outs and use this to hypnotise him, and make it appear that he is a traitor.