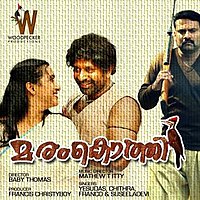 Maramkothi (Woodpecker) is a 2014 Indian Malayalam-language drama romance film written and directed by debutant Baby Thomas and produced by Francis Christyboy under the banner of Woodpecker Productions. The film features Sreejith Ravi, Tini Tom and Poojitha Menon in the lead roles. Kochupreman, Indrans, Mamukkoya, Kulappulli Leela and Chali Pala are in the supporting roles.

The film is centered around a group of common people who fight hard for land and nature. After the withdrawal of British powers from India, a sizeable portion of land came under the possession of landlords which made the conditions of local folks pity.