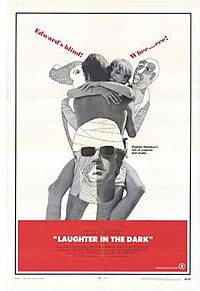 Laughter in the Dark is a 1969 French-British drama film directed by Tony Richardson and starring Nicol Williamson and Anna Karina. It is based on the novel of the same name by Vladimir Nabokov. Nicol Williamson was brought in as a very late replacement for Richard Burton, who had already shot several scenes. The director, Tony Richardson, found Burton's lack of punctuality intolerable.