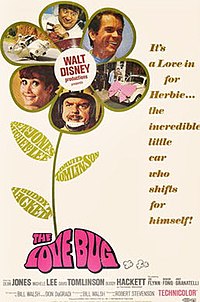 The Love Bug (sometimes referred to as Herbie the Love Bug) is a 1968 American comedy film directed by Robert Stevenson and the first in a series of films made by Walt Disney Productions and distributed by Buena Vista Distribution that starred an anthropomorphic pearl-white, fabric-sunroofed 1963 Volkswagen racing Beetle named Herbie. It was based on the 1961 book Car, Boy, Girl by Gordon Buford.

Jim Douglas is a miserable race car driver, reduced to competing in demolition derby races against drivers half his age. Jim lives in an old fire house overlooking San Francisco Bay with his friend and mechanic, Tennessee Steinmetz, a jolly Brooklynite who constantly extols the virtues of spiritual enlightenment, having spent time amongst Buddhist monks in Tibet, and builds "art" from car parts. After yet another race ends in a crash (and Tennessee turns his Edsel into a sculpture), Jim finds himself without a car and heads into town in search of some cheap wheels. He is enticed into an upmarket European car showroom after setting eyes on an attractive sales assistant and mechanic, Carole Bennett. Jim witnesses the dealership's British owner, Peter Thorndyke, being unnecessarily abusive towards a white Volkswagen Beetle that rolls into the showroom, and defends the car's honor, much to Thorndyke's displeasure. The following morning, Jim is shocked to find that the car is parked outside his house and that Thorndyke is pressing charges for grand theft. A heated argument between Jim and Thorndyke is settled when Carole persuades Thorndyke to drop the charges if Jim purchases the car on a system of monthly payments.