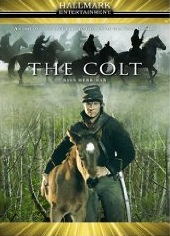 The Colt is a 2005 television movie made for Hallmark Channel. The film is set during the American Civil War, and is based on the short story (Жеребёнок, Zherebyonok) by Nobel Prize winner Mikhail Sholokhov.

In 1864, an American Civil War troop struggles to survive when young Union soldier Jim Rabb (Ryan Merriman) discovers that his mare has given birth to a colt. A superior officer orders Jim to shoot the foal because it may become a burden, but Jim - seeing the colt as a sign of hope and a reminder of the beauty of life - refuses. The colt remains with the men as they battle. When Confederates overtake the camp and steal the colt, Jim must risk his life retrieving it.