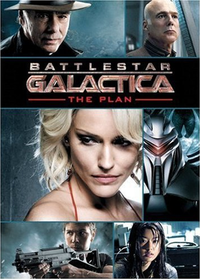 Battlestar Galactica: The Plan is a television film set in the reimagined version of the fictional Battlestar Galactica universe. It consists of newly filmed material as well as a compilation of footage from the 2004 TV series and miniseries.

The opening scenes of The Plan occur just prior to the destruction of the Twelve Colonies in the televised miniseries, Battlestar Galactica. Humanoid Cylon John Cavil is shown leading the planning for the genocidal attack on the human race. The seven known Cylons are present in the control room of the main Cylon base. Two versions of Cavil are shown in a Resurrection Ship, with the "Final Five" Cylons in stasis in resurrection chambers. The two versions of Cavil briefly discuss their plans for "teaching a lesson" to their creators, the Final Five. One version of Cavil announces his intention to witness the destruction of humanity on the ground. This version of Cavil travels to the planet Picon, where he encounters Ellen Tigh. Other characters from the series are also depicted: Gaius Baltar has a final meeting with Caprica Six; Samuel Anders is shown at his Pyramid team's training camp along with the team doctor, who is Number Four/Simon; and Tory Foster (Rekha Sharma) is shown driving to an airport.