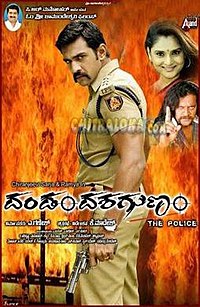 Dandam Dashagunam is a 2011 Indian Kannada action film starring Chiranjeevi Sarja and Ramya in the lead roles . The film has been directed and written by director K. Madesh and produced by A. Ganesh . V. Harikrishna has composed the soundtrack and the background score. The film is slated for release on 15 April 2011. The film is a remake of Surya and Jyothika starrer Tamil film, Kaakha Kaakha.

ACP Surya I. P. S. is an efficient officer who works to serve people. While handling a case he comes across Maya. A toughie at heart, he falls for her. He meets her again in the mall but does not talk to her. He meets her again and she comes to know that he is an officer. After a few months he sees her again at a school where Maya works as a teacher. Once one of maya's students has a problem & she seeks Surya's help, who helps her out. Surya is assigned to overlook the roads where the state c.m would pass. Maya sees Surya and requests him to have a cup of coffee with her but he declines as he is on duty. Maya while crossing the road meets with an accident, Surya takes her to a nearby hospital. After a few days Surya comes to meet Maya at her house, she requests him to take her out on a ride as she was bored of staying at home. She takes him to a boat house (the place which she owns) and tells him that she likes him a lot and proposes, he first refuses and later accepts. He is assigned to arrest a drugs smuggler (the villain of the story). He kidnaps Maya so as to escape Surya but fails to do so and ultimately dies.