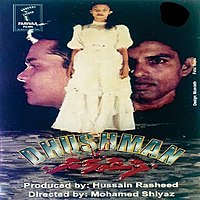 Riyaz (Hussain Sobah), a poor student, disturbed with the loud radio sports commentary played by Nisha (Mariyam Nisha), a rich student from the same college, involves in a heated argument with Nisha. Principal threatened to exile Riyaz but Nisha withdrew her complaint against him. Nisha apologizes to Riyaz and he accepts, resulting a friendship grow between them. Riyaz and Nisha rehearses for exam together and start spending more time with each other. On the day of exam, Riyaz was informed of his father's illness and quickly leaves to his island which results him missing the exam.