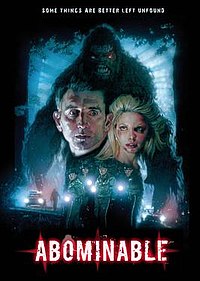 Abominable is a 2006 American monster film, directed and written by Ryan Schifrin. Starring Matt McCoy, Jeffrey Combs, Lance Henriksen, Rex Linn, Dee Wallace, Phil Morris, Paul Gleason and Haley Joel.The film follows paraplegic widower Preston Rogers (McCoy) as he moves back into the remote cabin where he and his now-deceased wife once lived. Preston quickly realizes that a sadistic Sasquatch is stalking the woods around the cabin, but nobody believes him.

A couple is terrorized in the middle of the night by a giant figure that kills their dog, and leaves large footprints in their yard.