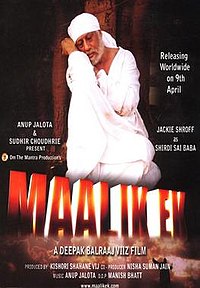 Malik Ek is a Hindi spiritual film on Sai Baba of Shirdi featuring Jackie Shroff, Manoj Kumar and Divya Dutta. Shroff plays in the title role. The film is directed by Deepak Balraj Vij and the music is scored by Anup Jalota, who also plays the role of Das Ganu. The film was released on 29 October 2010.