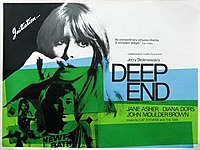 Deep End is a 1970 British–West German drama film directed by Jerzy Skolimowski and starring Jane Asher and John Moulder Brown. Set in London, the film focuses on the relationship between two young colleagues at a suburban bath house and swimming pool.

Mike (John Moulder Brown), a 15-year-old school leaver, finds a job in a public bath. There he is trained by his colleague Susan (Jane Asher), a woman ten years his senior. Susan is a tease who plays with Mike's and other men's feelings, acting sometimes warm and affectionate and other times cold and distant. Working at the baths turns out to involve providing services to clients of a more or less sexual nature, in exchange for a tip. For example, an older woman (Diana Dors) is sexually stimulated by pushing Mike's head into her bosom and talking suggestively about football. Mike is confused by this and at first does not want to accept the tip he gets, but Susan tells him that these services are a normal practice, including exchange of her female clients for his male clients whenever a client prefers the opposite sex.