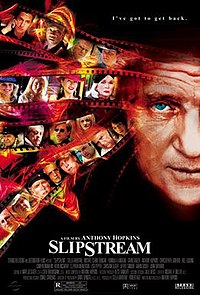 Slipstream is a 2007 American film starring, written, scored, and directed by Anthony Hopkins, which explores the premise of a screenwriter who is caught in a slipstream of time, memories, fantasy and reality. The film premiered at the 2007 Sundance Film Festival. Hopkins composed the music for the film, while British composer Harry Gregson-Williams scored and produced it.