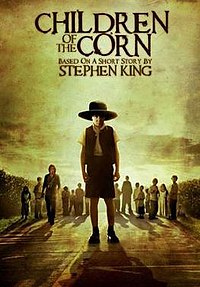 Children of the Corn is a 2009 horror television film directed, written and produced by Donald P. Borchers. It is based on the 1977 short story of the same name by Stephen King and the eighth installment of the Children of the Corn series. Set primarily in 1975 in the fictional town of Gatlin, Nebraska, the film centers on traveling couple Burt and Vicky as they fight to survive a cult of murderous children who worship an entity known as He Who Walks Behind the Rows, which had years earlier manipulated the children into killing every adult in town.

In 1963, the town of Gatlin, Nebraska, is suffering a severe drought. In a tent,