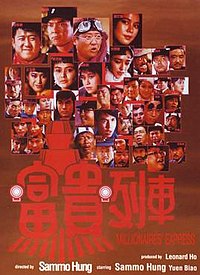 Ching Fong-Tin (Sammo Hung) goes to Russia to steal goods from the Russian soldiers. Unfortunately he is caught and the soldiers make him strip his clothes down to his underwear. They force him to wear a brassiere and the head of a mop as a wig, and he is made to dance for their amusement. However, he makes his escape, grabbing his grenades as he goes, and throws one into the cabin. Fook Loi (Kenny Bee) catches Ching and lectures him about his crimes. Ching tries to escape, but in the scuffle, he and Fook end up rolling into a snowball. In the final moments after they both got out of the snowball, Fook tries to look for Ching and is taken by surprise when he jumps down from a tree, grabs his clothes and rushes off back to his hometown.