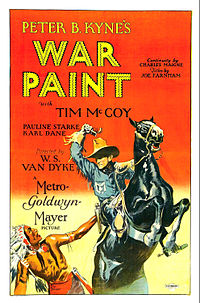 War Paint is a 1926 Western film directed by W. S. Van Dyke. The film stars Tim McCoy. Louis B. Mayer observed the profits made by other studios with western franchises such as Tom Mix, Buck Jones or Hoot Gibson. He selected a genuine army officer who had lived with Indian tribes to come to Hollywood as an advisor on 1922's The Covered Wagon: Colonel Timothy John Fitzgerald McCoy. His debut as Tim McCoy in War Paint was announced under the banner "He's the real McCoy!" In order to maximize the economics, the film was shot simultaneously on location with another film, Winners of the Wilderness. The film is considered lost. A trailer however is preserved at the Library of Congress.