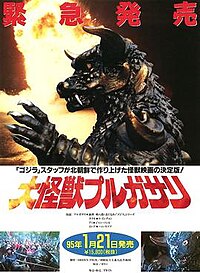 Pulgasari is a 1985 North Korean dark fantasy-action monster film directed by Shin Sang-ok and Chong Gon Jo. It stars Chang Son Hui and Pak Sung Ho and features special effects by Duk Ho Kim, supervised by Teruyoshi Nakano. The film is loosely based on the legend of the Bulgasari.

In feudal Korea, during the Goryeo Dynasty, a king controls the land with an iron fist, subjecting the peasantry to misery and starvation. An old blacksmith who was sent to prison for defending his people creates a tiny figurine of a monster by making a doll of rice, and before dying asks the gods of earth and sky to make his creation a living creature that protects the rebels and the oppressed. When the figurine comes into contact with the blood of the blacksmith's daughter, the creature springs to life, becoming a giant metal-eating monster whom the blacksmith's daughter names Pulgasari, which is the name of the mythical monster her father used to mention as an eater of iron and steel. Pulgasari now shares a special bond with the blacksmith's daughter, and after he starts eating some of the farmer's tools, becomes a giant and powerful figure.