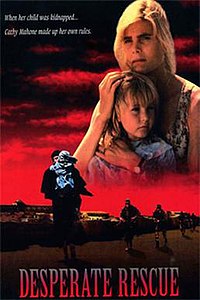 Desperate Rescue: The Cathy Mahone Story is a 1993 American made-for-television drama film starring Mariel Hemingway. It was directed by Richard A. Colla and originally premiered on NBC on January 18, 1993.

Film based on a true story of a woman who tries to rescue her 7-year-old daughter from the Middle East after she is abducted by her Jordanian father.