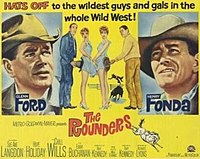 The Rounders is a 1965 American western film directed by Burt Kennedy and starring Glenn Ford and Henry Fonda. It is based on the 1960 novel of the same name by Max Evans.

Ben Jones (Glenn Ford) and Marion "Howdy" Lewis (Henry Fonda) are two easygoing, modern-day cowboys who make a meager living breaking wild horses. Their frequent employer is Jim Ed Love (Chill Wills), a shrewd businessman who always gets the better of them. After they bring him a string of tamed horses and spend the winter rounding up stray cows, he talks them into taking a nondescript roan horse in lieu of some of their wages.