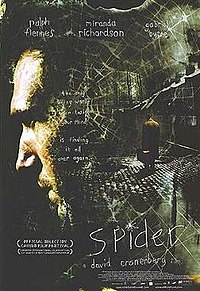 Spider is a 2002 Canadian-British psychological drama film produced and directed by David Cronenberg and based on the novel of the same name by Patrick McGrath, who also wrote the screenplay.

Spider is the story of Dennis Cleg, a man who is given a room in a halfway house catering to mentally disturbed people. Cleg has just been released from a mental institution and in his new abode starts piecing together or recreating in his memory an apparently fateful childhood event.