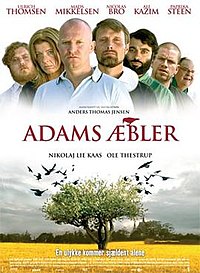 Adam's Apples is a 2005 Danish black comedy-drama film directed and written by Anders Thomas Jensen. The film revolves around the theme of the Book of Job. The main roles are played by Ulrich Thomsen and Mads Mikkelsen.

Neo-Nazi gang leader Adam (Ulrich Thomsen) is granted parole from prison for participating in a rehabilitation program, where he joins the aggressive Saudi gas station robber Khalid (Ali Kazim) and the kleptomanic rapist Gunnar (Nicolas Bro). The community is headed by the priest Ivan (Mads Mikkelsen), who believes firmly and blindly in the goodness of man, and is seemingly oblivious to the ongoing misconduct and aggression of his charges.