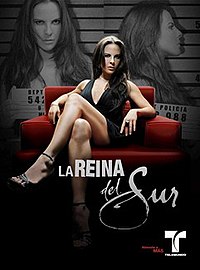 La Reina del Sur is a Spanish-language telenovela based on a novel of the same name by Spanish author Arturo Pérez-Reverte. The first season is produced by the American television network Telemundo in conjunction with the Antena 3 network and RTI Producciones, while season 2 is co-produced by Telemundo Global Studios and Netflix. It premiered on 28 February 2011. The series depicts the rise of Teresa Mendoza (Kate del Castillo), a young woman from Mexico who becomes the most powerful drug trafficker in southern Spain.