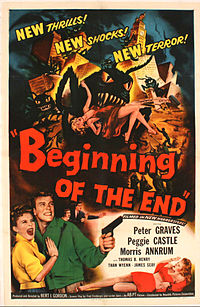 Beginning of the End is a 1957 independently made American black-and-white science fiction giant insects film, produced and directed by Bert I. Gordon. It stars Peter Graves, Peggie Castle, and Morris Ankrum. The film's storyline concerns an agricultural scientist (Graves) who has successfully grown gigantic vegetables using radiation. Unfortunately, the vegetables are eaten by locusts (the swarming phase of short-horned grasshoppers), which quickly grow to a gigantic size and attack the nearby city of Chicago. Beginning of the End is generally known for its "atrocious" special effects, "and yet," writes reviewer Bill Warren, "there is something almost compellingly watchable about this goofy little movie".

The film opens with newspaper photojournalist Audrey Aimes (Peggie Castle) accidentally stumbling upon a small town (Ludlow, Illinois) which has been inexplicably destroyed. All 150 people in the town are missing, and the evidence indicates they are dead. Incredibly, the local fields are also barren, as if a swarm of locusts had eaten all the crops. Aimes suspects that the military is covering something up, and travels to a nearby United States Department of Agriculture experimental farm to learn what creature might have caused the agricultural destruction. She meets Dr. Ed Wainwright (Peter Graves), who is experimenting with radiation as a means of growing gigantic fruits and vegetables to end world hunger. Wainwright reports that there have been a number of mysterious incidents nearby, and that locusts have eaten all the radioactive wheat stored in a nearby grain silo.