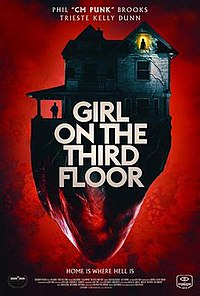 Girl on the Third Floor is a 2019 horror film directed by Travis Stevens, written by Stevens, Paul Johnstone and Ben Parker, and starring Phil "CM Punk" Brooks, Trieste Kelly Dunn and Tonya Kay. The film tells the story of a deeply flawed man who renovates an old home for himself and his wife, and the supernatural events that ensue as they prepare to move in.

Don Koch, a man from Chicago with a criminal past, purchases an old house in the suburbs hoping for a new start for his pregnant wife, Liz, and their dog, Cooper. Shortly after moving in, Don meets Ellie Mueller, the pastor living across the street. Later, Don learns from the local bartender about the house's sordid past, and its effect on straight men. Don witnesses strange events within the home, including sludge-like substance seeping from the walls and fixtures, as well as the appearance of marbles throughout the home. Next, Don meets another assumed neighbor, Sarah Yates, who easily seduces him in the upstairs bedroom. After she leaves, the bedroom ceiling collapses revealing a viewing platform in the attic. The next day Sarah appears again and tries to seduce Don, but he admits his guilt and dismisses her.