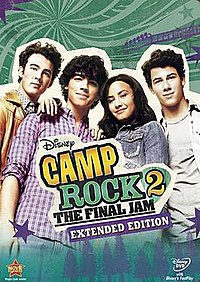 Mitchie Torres (Demi Lovato) returns to Camp Rock for another summer year along with her friends and the members of the band Connect 3: Mitchie's love interest, Shane Gray (Joe Jonas), Nate Gray (Nick Jonas), and Jason Gray (Kevin Jonas). Along the way, she and her mother, Connie Torres (Maria Canals-Barrera), notice that a new camp, Camp Star, has opened across the lake. Mitchie and her friends also notice that there are fewer campers than last year and attempt to lift everyone's spirits at the Opening Jam. Camp Star sends parachutes to Camp Rock with chocolates, graham crackers, and marshmallows, inviting them to a bonfire at their camp, but Brown Cesario is less than enthusiastic, as Camp Star's founder is Axel Turner (Daniel Kash), whom he kicked out of his band.