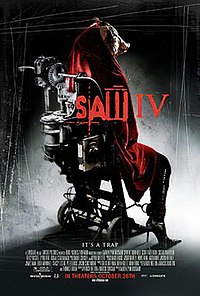 Saw IV is a 2007 horror film directed by Darren Lynn Bousman from a screenplay by Patrick Melton and Marcus Dunstan, and a story by Melton, Dunstan, and Thomas Fenton. It is the fourth installment in the Saw film series, the third directed by Bousman. The film stars Tobin Bell, Costas Mandylor, Scott Patterson, Betsy Russell, Lyriq Bent, Justin Louis, and Donnie Wahlberg. Set concurrently with the events of Saw III, the plot follows Officer Daniel Rigg, who is put through a series of tests by the Jigsaw Killer meant to help him let go of his obsession to save everyone, while also attempting to save his partners, Eric Matthews and Mark Hoffman. The film also explores John Kramer's legacy and his ability to manipulate people into continuing his work after his death, while providing more of his backstory and an additional explanation as to why he became Jigsaw.

A microcassette is found in John Kramer's stomach during his autopsy, which contains a posthumous message from John that informs Detective Mark Hoffman he will be tested. Elsewhere, two men – one with his eyes sewn shut, the other with his mouth sewn shut – awaken in a mausoleum, chained at the neck to a winch. The muted man can kill the blinded man to get a key from his collar and free himself.