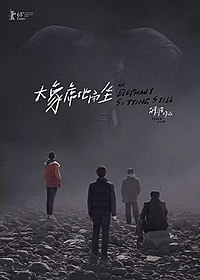 An Elephant Sitting Still (, "Dà Xiàng Xídì Érzuò") is a 2018 Chinese drama written, directed, and edited by Hu Bo. The first and only film by the novelist-turned-director Hu, who died by suicide soon after finishing his film on 12 October 2017 at the age of 29, it is based on a story with the same title from his 2017 novel Huge Crack, about four people who travel to a northern Chinese city to see the eponymous elephant. It made its world premiere in the Forum section of the 68th Berlin International Film Festival. The film has won acclaim from established directors such as Béla Tarr, Wang Bing, Ang Lee, and Gus Van Sant.

In Shijiazhuang, gang member Yu Cheng monologues with a woman in his bed about a sitting elephant in a circus in Manzhouli who could be thrashed and beaten but remains still. A man later argues with her; he is Cheng's close friend and she his wife. The friend later kills himself off-screen. Later, Cheng meets his girlfriend, who rejected his sexual advances, and blames for the suicide. He tells her he plans to see the elephant in Manzhouli.