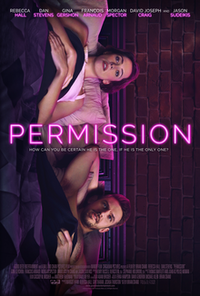 Permission is a 2017 American romantic comedy-drama film written and directed by Brian Crano. The film stars Rebecca Hall as a woman on the brink of a marriage proposal from her boyfriend (Dan Stevens), but is impeded by the suggestion of her brother (David Joseph Craig) and his life partner (Morgan Spector) to "test date" other men before she ultimately settles down. Meanwhile, the film also follows the relationship of the gay couple as they decide whether or not to become parents.