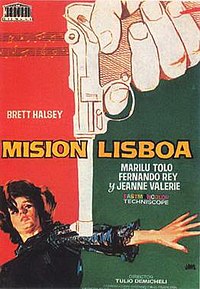 Espionage in Lisbon (, , , also known as Mission Lisbon) is a 1965 Spanish-Italian-French Eurospy film directed by Federico Aicardi and Tulio Demicheli. It is an unofficial entry in the Secret Agent 077 film series. It starred Brett Halsey, Marilu Tolo and Fernando Rey. Horror film icon Jesus Franco wrote the original story which the film is based on, and worked on the music score as well.