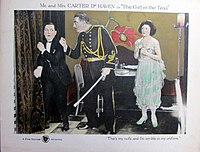 The Girl in the Taxi is a 1921 American silent comedy film directed by Lloyd Ingraham and starring Flora Parker DeHaven, Carter DeHaven, King Baggot, Grace Cunard, and Otis Harlan. It is based on the 1912 English-language adaptation of German play by Frederick Fenn and Arthur Wimperis. The film was released by Associated First National Pictures in April 1921.