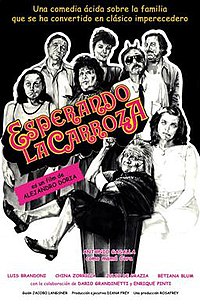 Waiting for the Hearse 1985

Waiting for the Hearse (Esperando la carroza in Spanish) is a 1985 Argentine comedy film directed by Alejandro Doria. It is considered a cult film. It opened on 6 May 1985.

Musicardi's octogenarian widow, Ana María de los Dolores Buscaroli, called Mamá Cora by everybody (Antonio Gasalla), has four children: Antonio (Luis Brandoni), Sergio (Juan Manuel Tenuta), Emilia (Lidia Catalano) and Jorge Musicardi (Julio De Grazia) with whom she lives and goes through financial troubles. This situation, plus lack of space and constant generational conflicts, makes Susana (Jorge's wife) ask desperately for the siblings-in-law to take their mother with any of them for a while.