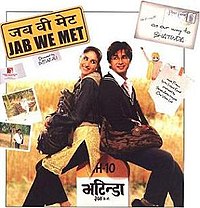 Jab We Met (English: When We Met) is a 2007 Indian romantic drama film directed and written by Imtiaz Ali. The film, produced by Dhillin Mehta under Shree Ashtavinayak Cinevision Ltd, stars Shahid Kapoor and Kareena Kapoor in their fourth film together with Dara Singh, Pavan Malhotra and Saumya Tandon in supporting roles.

Aditya Kashyap (Shahid Kapoor) is a wealthy industrialist struggling with his business and personal life. With his company in a bad condition and his girlfriend marrying another man, he becomes depressed and wanders aimlessly until he boards a train, wanting to get away from his life. Inside, he meets another passenger, Geet Dhillon (Kareena Kapoor), a bubbly, talkative Sikh girl. Irritated by her talkativeness, he lashes out at her, but she thinks nothing of it, understanding that he is upset.