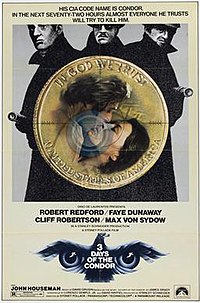 Three Days of the Condor is a 1975 American political thriller film directed by Sydney Pollack and starring Robert Redford, Faye Dunaway, Cliff Robertson, and Max von Sydow. The screenplay by Lorenzo Semple Jr. and David Rayfiel was based on the 1974 novel Six Days of the Condor by James Grady.

Joe Turner (Robert Redford) is a bookish CIA analyst, code named "Condor". He works at the American Literary Historical Society in New York City, which is actually a clandestine CIA office. The seven staff members read books, newspapers, and magazines from around the world, looking for hidden meanings and other useful information. Turner files a report to CIA headquarters on a thriller novel with some strange plot elements, noting the unusual assortment of languages it has been translated into (despite not selling well).