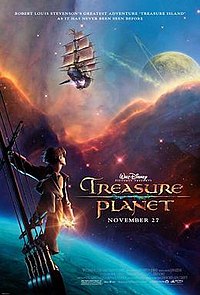 Treasure Planet is a 2002 American animated science fiction action adventure film produced by Walt Disney Feature Animation and released by Walt Disney Pictures on November 27, 2002. The 43rd Disney animated feature film, it is a science fiction adaptation of Robert Louis Stevenson's 1883 adventure novel Treasure Island and was the first film to be released simultaneously in regular and IMAX theaters. It is at least the second retelling of the story in an outer space setting, following the 1987 Italian miniseries Treasure Island in Outer Space. It employs a novel technique of hand-drawn 2D traditional animation set atop 3D computer animation. With a budget of $140 million, it is the most expensive traditionally animated film ever made.

On the planet Montressor, young Jim Hawkins is enchanted by stories of the legendary pirate Captain Nathaniel Flint and his ability to appear from out of nowhere, raid passing ships, and disappear in order to hide the loot on the mysterious "Treasure Planet". 12 years later, Jim has grown into an aloof and isolated troublemaker due to his father abandoning him and his mother. He reluctantly helps his mother Sarah run the family's Benbow Inn, and derives amusement from "Alponian solar cruising": skysurfing atop a rocket-powered sailboard.