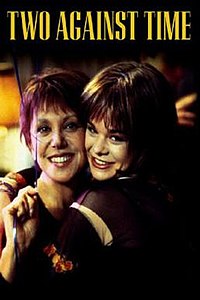 Two Against Time is a 2002 American made-for-television drama film starring Marlo Thomas and Ellen Muth. It was written by Casey Kurtti and Peter Nelson and directed by David Anspaugh. The film was originally aired on CBS on April 4, 2002.

A mother and her daughter are, almost at same time, diagnosed with cancer. Now, the struggle against the illness will set them close and help them to overcome old antagonisms.