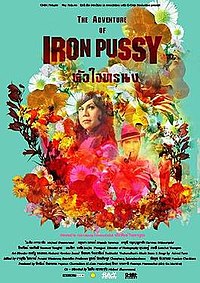 The Adventure of Iron Pussy 2003

The Adventure of Iron Pussy is a 2003 Thai musical-action-comedy film written and directed by Apichatpong Weerasethakul and Michael Shaowanasai and starring Shaowanasai. The protagonist is a crossdressing Thai secret agent whose alter ego is a gay male convenience clerk. A homage and parody of the 1970s Thai action films, musicals and melodramas, particularly those that starred Mitr Chaibancha and Petchara Chaowarat, the movie premiered at the 2003 Tokyo International Film Festival and has also played at the Berlin Film Festival, the International Film Festival Rotterdam and other festivals. It is a cult film and has screened at several gay and lesbian film festivals as well.

The scene opens on a rural Thai coffee shop, run by an elderly man and his attractive teenage daughter. A gang of local thugs come in and start roughing up the customers and get abusive with the daughter. Suddenly, an elaborately coifed and tastefully dressed woman shows up and rescues the young woman and her father from further harm. This is Iron Pussy.