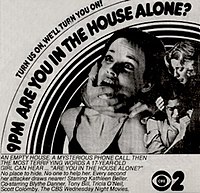 Are You in the House Alone? is a 1978 American made-for-television horror film directed by Walter Grauman and starring Kathleen Beller, Blythe Danner, and Dennis Quaid. The film is based on the 1976 novel of the same name written by Richard Peck. It originally aired on CBS on September 20, 1978.

16-year-old Gail Osborne is a typical high school student with a passion for photography. Six months ago, she and her parents moved from San Francisco to a smaller town due to her father Neil's claim the city was too dangerous following a burglary. Gail, a high spirited romantic, initially started dating classmate E.K. Miller, but he broke off their relationship because Gail was unwilling to sleep with him.