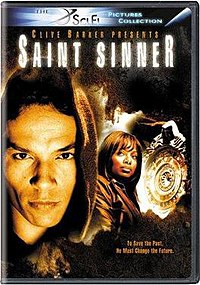 Saint Sinner (full title Clive Barker Presents Saint Sinner) is a 2002 horror television film written by Doris Egan and Hans Rodionoff based on a short story by executive producer Clive Barker. It was directed by Joshua Butler. Aside from the title, it is unrelated to the comic-book series published by Marvel Comics' Razorline imprint and created by Barker. In this film, an immortal monk hunts down two succubi. It premiered on the U.S. Sci Fi Channel on October 26, 2002.

In 1815 California, Father Michael, an emissary of Pope Pius VII, has traveled to meet with novice monk Brother Tomas. The young monk's order serves as the secret repository for evil, supernatural objects collected by the Church, and kept there for safekeeping. Michael delivers an ancient statue that has trapped two beautiful female demons, Munkar and Nakir. Tomas and his friend Brother Gregory inadvertently release the murderous demons, who travel to the 21st century using the monastery's Wheel of Time.