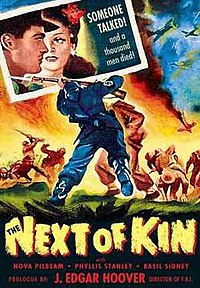 The Next of Kin, also known as Next of Kin, is a 1942 Second World War propaganda film produced by Ealing Studios. The film was originally commissioned by the British War Office as a training film to promote the government message that "Careless talk costs lives". After being taken on by Ealing Studios, the project was expanded and given a successful commercial release. After the war and up until at least the mid 1960s, services in British Commonwealth countries continued to use The Next of Kin as part of security training. The film's title is derived from the phrase "the next of kin have been informed" as used by radio announcers when reporting on the loss of personnel in action.

In preparing for a secret raid on a German-held French coastal village. a British security officer (Reginald Tate) is chosen to monitor activities in England among army personnel of the 95th Infantry as well as civilians with whom they mingle. At the same time, German intelligence send Agents 23 (Mervyn Johns) and 16 (John Chandos) to England to obtain information from sources including conversations overheard in pubs, railway stations, shops and other public places. Agent 16 is caught, but 23 reaches his contact, Mr Barratt (Stephen Murray), a bookseller at Westport, who assigns him the job of infiltrating an ordnance depot. After he helps an ATS driver (Thora Hird) with a punctured tire, she invites him to a dance. There, he learns the unit has top priority for special equipment. Agent 23 makes it his task to find out why.