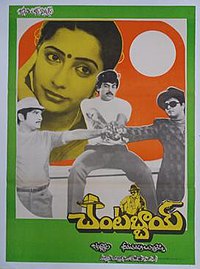 Chantabbai is a 1986 Indian Telugu-language comedy drama film adapted and directed by Jandhyala, based on Malladi Venkata Krishna Murthy's novel with the same name. The film was a casting coup in that Chiranjeevi, who was an action hero, was cast as a bumbling private detective in a full-length comedy. The film received critical acclaim and is considered be a classic film.

Panduranga "Pandu" Rao is an amateur detective employed at Universal Detective Agency in Visakhapatnam, which is run and managed by Ramachandra Murthy. He considers James Bond as his idol, and models himself after him in terms of appearance and gives himself the name "James Pond". Neither the police nor his colleagues take Pandu seriously, including his assistant Ganapathi and the local police inspector Saumitri. Pandu harbours feelings for Jwala, a self-employed telephone cleaner. She considers him as a good friend, but does not take his professional abilities seriously.