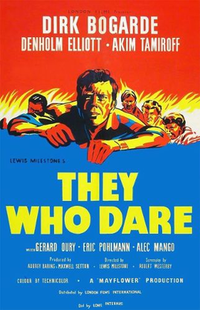 They Who Dare (aka Lewis Milestone's They Who Dare) is a 1954 Second World War war film directed by Lewis Milestone and starring Dirk Bogarde, Denholm Elliott and Akim Tamiroff. The story is based on Operation Anglo that took place during World War II in the Dodecanese islands where special forces attempted to disrupt the Luftwaffe from threatening Allied forces in Egypt. The title of the film is a reference to the motto of the Special Air Service: "Who Dares Wins".

During the Second World War, Lieutenant Graham (Dirk Bogarde) is sent on a mission to destroy two German airfields on Rhodes that may threaten Egypt. Under his command, a group of six Special Boat Service, two Greek officers and two local guides are assembled.