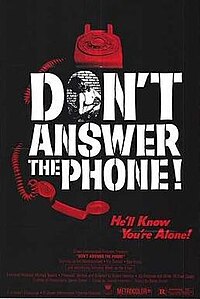 Don't Answer the Phone! is a 1980 American psychological horror film co-written and directed by Robert Hammer.

Vietnam vet, amateur bodybuilder, and talented porno-photographer Kirk Smith is a crazed killer who stalks the streets of Los Angeles, picking up young women, strangling them in lurid fashion, and sexually abusing their dead bodies. The opening shot of the film splits the frame into two images: Kirk flexing his muscles in a pose, and a large crucifix. Between murders, he carries out twisted religious ceremonies, has imaginary conversations with his dead father, and weeps like a baby. He repeatedly contacts Dr. Lindsay Gale, a psychologist with a radio show as well as a private therapy practice. He calls her show, speaking with an assumed Spanish accent and complaining of chronic headaches and blackouts. He follows one of Dr. Gale's female patients home from her therapy session, and tortures the patient to death. He also murders a prostitute while on the phone to Dr. Gale's show, forcing Dr. Gale to listen to the victim's cries.