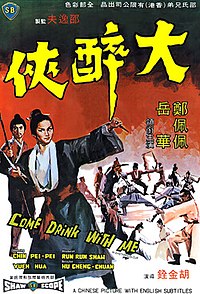 Come Drink with Me is a 1966 Hong Kong wuxia film directed by King Hu. Set during the Ming Dynasty, it stars Cheng Pei-pei and Yueh Hua as warriors with Chan Hung-lit as the villain, and features action choreography by Han Ying-chieh. It is widely considered one of the best Hong Kong films ever made. The film was selected as the Hong Kong entry for the Best Foreign Language Film at the 39th Academy Awards, but was not nominated.

A general's son is taken hostage and used as leverage to free a bandit leader. The general's other offspring, a girl named Golden Swallow, is sent to rescue the son. When the bandit gang encounter the Golden Swallow in a local inn, the prisoner negotiation escalates to bloodshed and the goons are swiftly defeated.