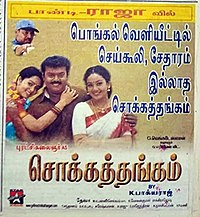 Chokka Thangam is a 2003 Indian Tamil-language drama film written and directed by K. Bhagyaraj. The film was produced by G. Venkateswaran under GV Films. The film stars Vijayakanth, Soundarya, and Uma in lead roles with Goundamani, Senthil, Prakash Raj, and Swathi playing supporting roles. The film's score and music was composed by Deva. The film was released on 15 January 2003 and was a super hit at the box office. It was also dubbed in Telugu as Maa Bava Bangaram.

Muthu (Vijayakanth) lives in a village with his sister Maragatham (Uma). Muthu is very fond of his sister and ready to do anything for her. Pavazham (Soundarya) is an orphan who lives in the same village. Muthu and Pavazham have a liking towards each other. Ponnambalam is the local baddie who tries to molest Pavazham when she is alone. However, Muthu comes for rescue and takes Pavazham along with him to his house.