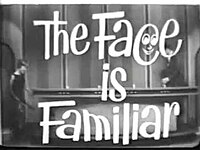 The Face Is Familiar is an American game show which aired in color on CBS as a summer replacement show from May 7 to September 3, 1966. The show was hosted by Jack Whitaker and featured celebrity guests including Bob Crane, Dick Van Patten, Mel Brooks and June Lockhart.