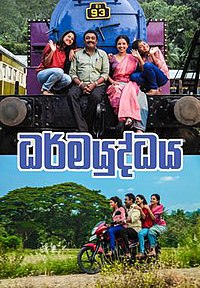 Dharmayuddhaya is a 2017 Sri Lankan Sinhala-language drama thriller film directed by Cheyyar Ravi and produced by MTV Channel and The Capital Maharaja Organization Limited, and distributed by M Entertainments. It is a shot-for-shot remake of the Indian Malayalam-language film Drishyam by Jeethu Joseph. The film stars Jackson Anthony and Dilhani Ekanayake in the lead roles and features Kusum Renu, Kumara Thirimadura, Thisuri Yuwanika and Roshan Pilapitiya in supporting roles. The music was composed by Sachith Peris.

A man named Harishchandra started out as an orphan who had dropped out of school after 4th grade, but is now a businessman running a real estate centre in a rural area named Manudampura. He is married to a woman named Rani and they have two daughters, Achini and Sachini. His only interest apart from his family is watching films and he spends most of his time in front of the TV in his small office.