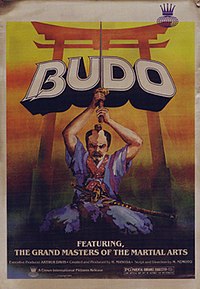 Budo: The Art of Killing is a compilation of various gendai budō each demonstrated by famous Japanese martial artists from the late 1970s. The film treats its subject matter with deep respect and demonstrates a great reverence for both Budō and Japanese culture in general. The film begins with Kunishirō Hayashi, reenacting seppuku, the ritualistic form of suicide practiced by Japanese samurai during Feudal Japan. This is followed by a demonstration of yabusame and footage of a samurai cavalry battle. The narrator then explains the connection between Budō and its universal symbol—the nihonto. After a demonstration of the effectiveness of the Japanese sword, the audience is shown the techniques developed by Okinawan farmers to combat the sword. Karate-do master Teruo Hayashi then demonstrates Okinawan weapon techniques. The film moves along with further footage of karate-do including makiwara training by Fujimoto (including the infamous shot of him striking a locomotive and chopping a beer bottle) and a demonstration of the nunchaku by Satoru Suzuki, a weapon made famous by Bruce Lee. The film moves to footage of traditional Judo training such as mat rolls, pole-hopping, bunny-hops, and practice of hip throws using rubber bands tied around trees. The film moves on to discuss naginata-do, a budō popular with female martial art practitioners in Japan. Aikido is then demonstrated by Gozo Shioda, the founder of Yoshinkan aikido interspersed with shots of leaves falling into a brook. To emphasize the film's theme of "mind and body are one in Budo" the viewer is shown Shinto practitioners fire walking. The film then shows training in a sumo stable with rikishi Takamiyama, where the training shown is both tough and cruel. Scenes of young people practicing kobudo on the beach follow the sumo demonstration as the narrator discusses the succession of Budō to younger generations. The film explains the importance of kata with Teruo Hayashi demonstrating more karate-do kumite. The narrator explains, "... karate training can be both severe and cruel, yet a sword can take away a life with one swing." The film shifts its focus to sword arts with demonstrations of iaido, tameshigiri and kendo by Shuji Matsushita and Tomoo Koide as the narrator discusses the fear instilled by the Japanese sword. The "limitless" connection between Zen Buddhism and Budō is discussed with Shuji Matsushita on the receiving end of a strike from an abbot's kyosaku while in zazen. This is followed by a highlight of the film in which Taizaburo Nakamura demonstrating various sword cuts including a shot filmed in slo-motion showing the shocking speed in which a Japanese sword can behead a man (1/100 of a second). Continuing with a focus on the sword, the film shows the art of traditional nihonto forging by swordsmith Amada Akitsugu, considered a national living treasure in Japan. Budo: The Art of Killing concludes with scenes of Noh as the narrator explains, "As long as the universal truths of heaven, the earth and man remain, the spirit of Budo shall endure."