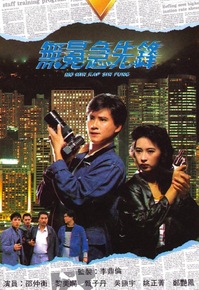 Mou Min Kap Sin Fung, also known by its alternative title File Noir, is a 1989 Hong Kong action crime thriller television series produced by TVB and starring David Siu, Kitty Lai, Donnie Yen and Francis Ng. Originally released overseas in September 1988 and aired from 1 to 26 May 1989 on TVB Jade, the series reran on TVB's Network Vision channel from 25 January to 29 February 2016 as a part of the special, Our... Donnie Yen (我們的...甄子丹), that began running on 11 January 2016.

While investigating a tanker explosion case, news reporter Hau Man-wan (David Siu) suspects it as scheme for Au Chi-ho's (Kenneth Tsang) consortium to deceive insurance money. Man-wan uses his relationship with Au's daughter, Man-ching (Frances Lau), to get close to Au, hoping to find out the truth. Au is fiercely ambitious and in order for him to expand his influence, he resorts to ruses to annex the force of his opponents and uses Man-wan to gather criminal evidence to put his opponents in jail.