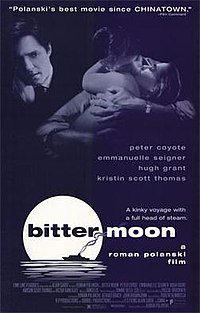 British couple Nigel and Fiona Dobson are on a Mediterranean cruise ship to Istanbul en route to India. They encounter a beautiful French woman, Mimi, and that night Nigel meets her while dancing alone in the ship's bar. Later Nigel meets her much older and disabled American husband Oscar, who is acerbic and cynical, having been jaded and a failure as a writer.